My field trip was to travel to Setomaa, at the very southeastern most part of Estonia on the border of Russia and Latvia. 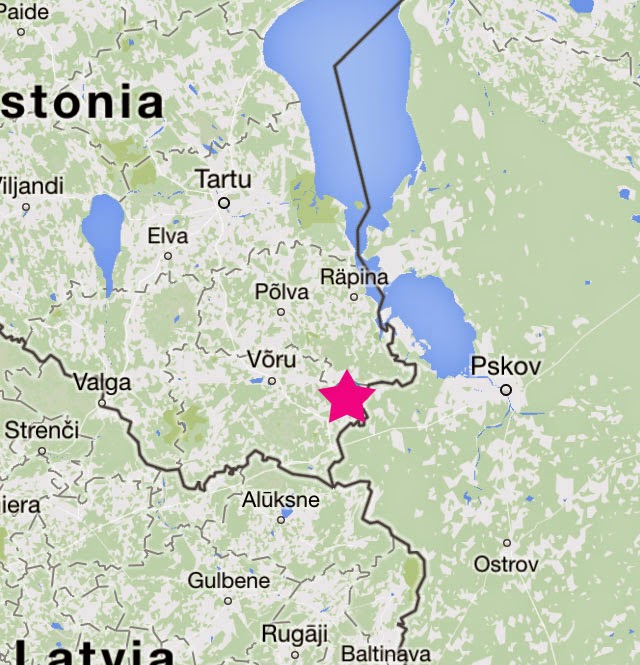 I was excited to experience not only the unique handicrafts of this region, but also learn about the food, music and way of living. We arrived and were welcomed by Evar and Ülle at the Setokunstiq Gallery. They told us about the history and traditions of the area. Red, black and white are the predominant colors in Seto textiles. The hand work is incredibly detailed and precise. Although there is clearly a style to the crafts of this region, Ülle explained that no two pieces would be the same. It was a show of skill to make your embroidery have a different design than anyone else in the village. 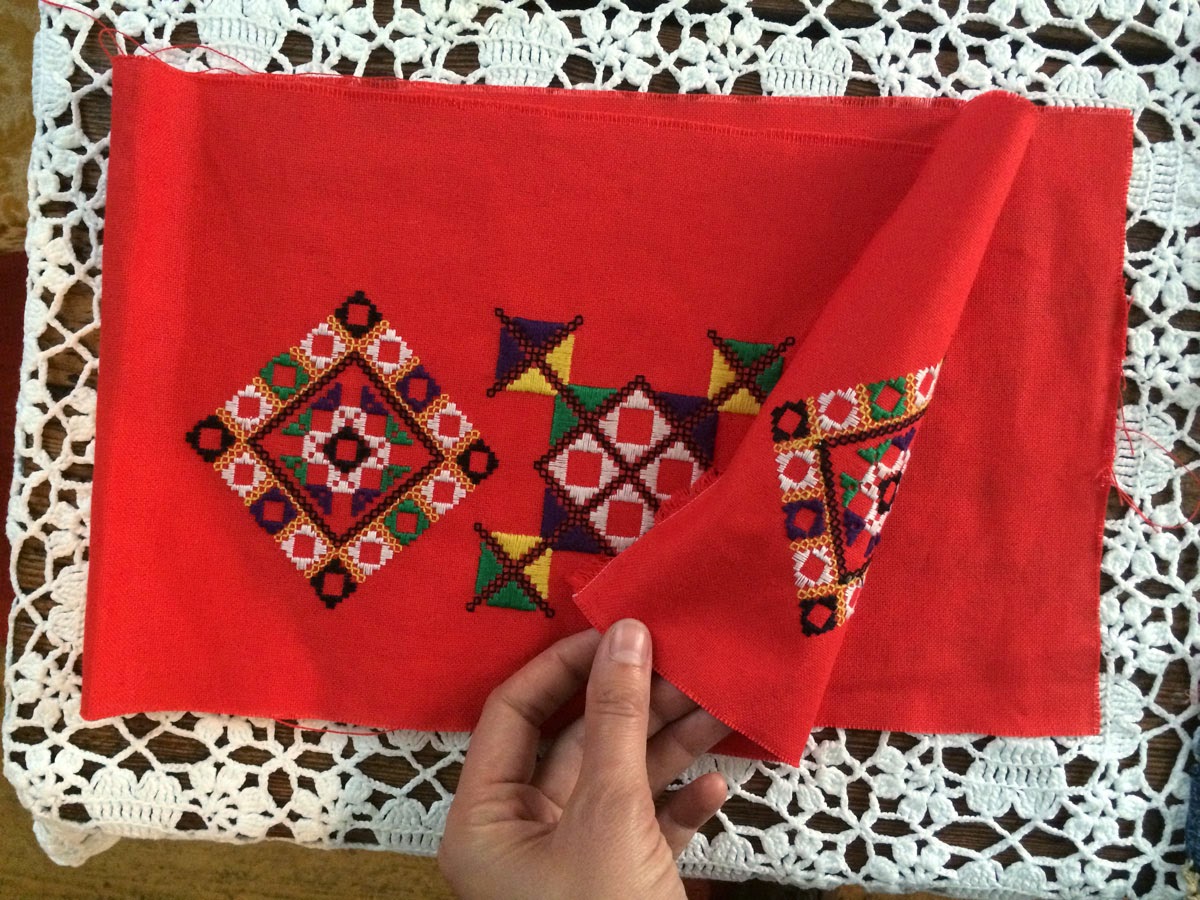 She showed us examples of some of the crafts, and I was amazed at their style of embroidery stitching that is as neat and finished on the back as it is on the front. Incredible! 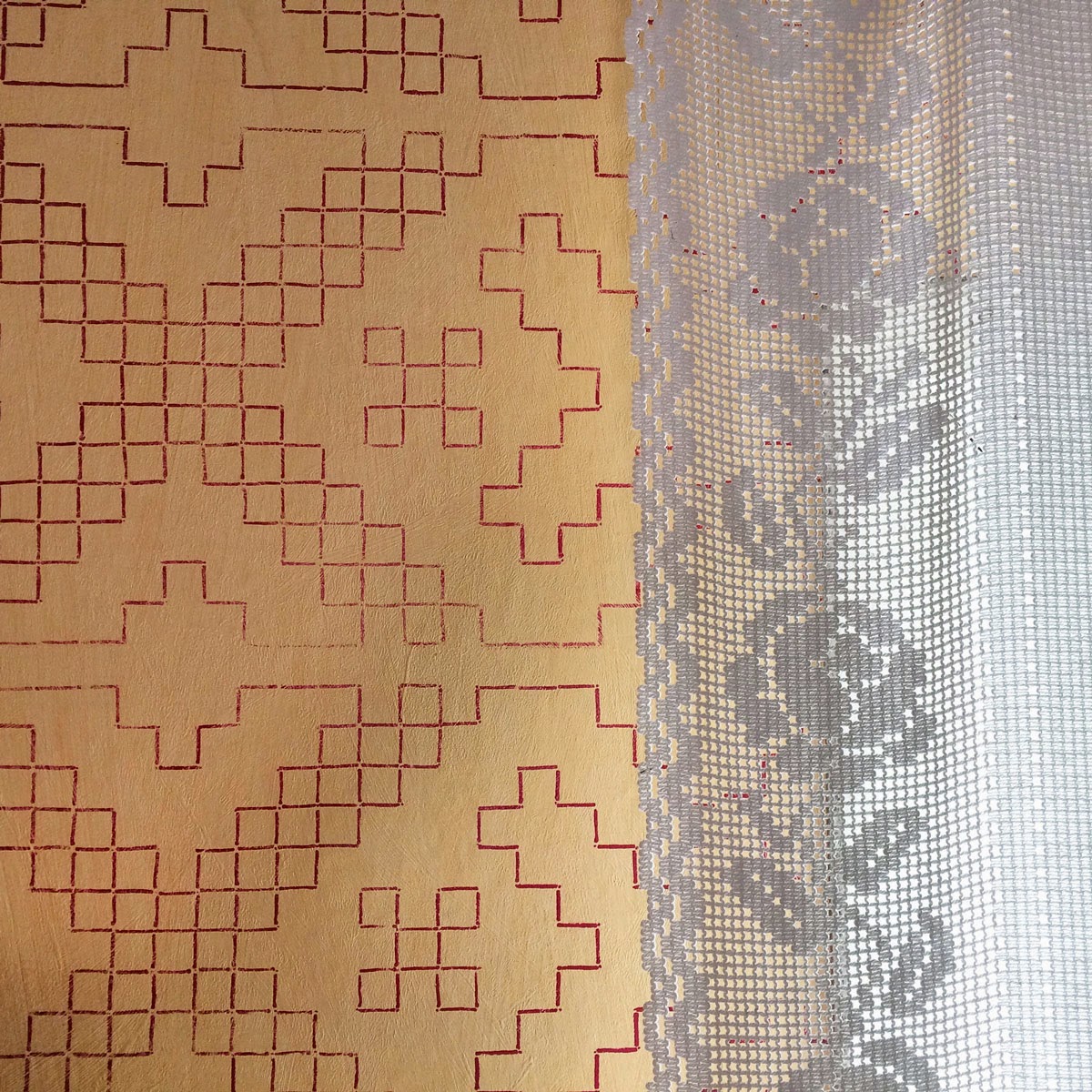 Evar, Ülle's husband is an artist. The gallery space was decorated in his handprinted wallpaper and painted floors. 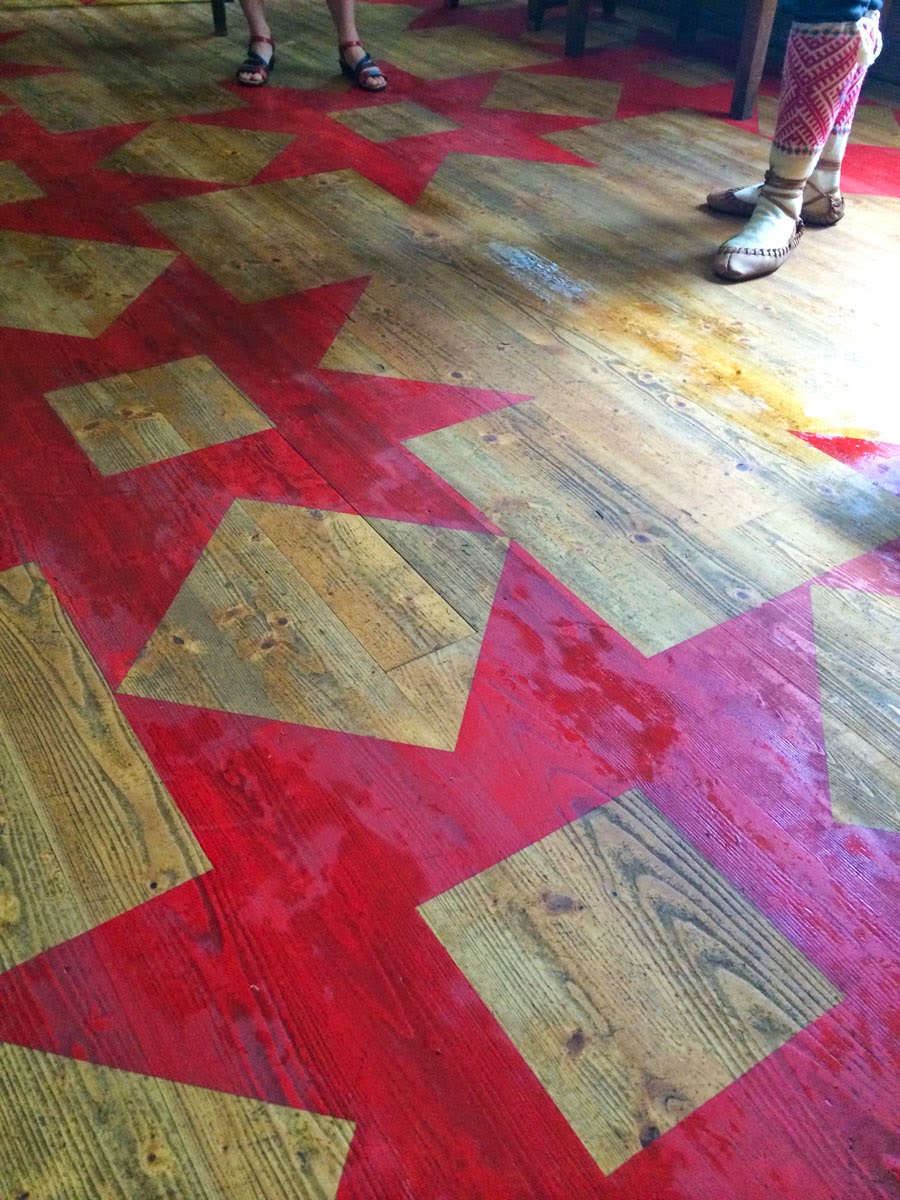 He is also passionate about keeping some of the old craft traditions alive. Evar is currently honing his metalwork and etching skills. One of the traditional jewelry pieces in Setomaa is a large silver pendant that married women wore on their chest. They were engraved with magical symbols and used in many ceremonies. There are few examples of them left, and some have been cut up or melted to make modern jewelry. He has been working on making replicas that are true to the originals in style and quality. 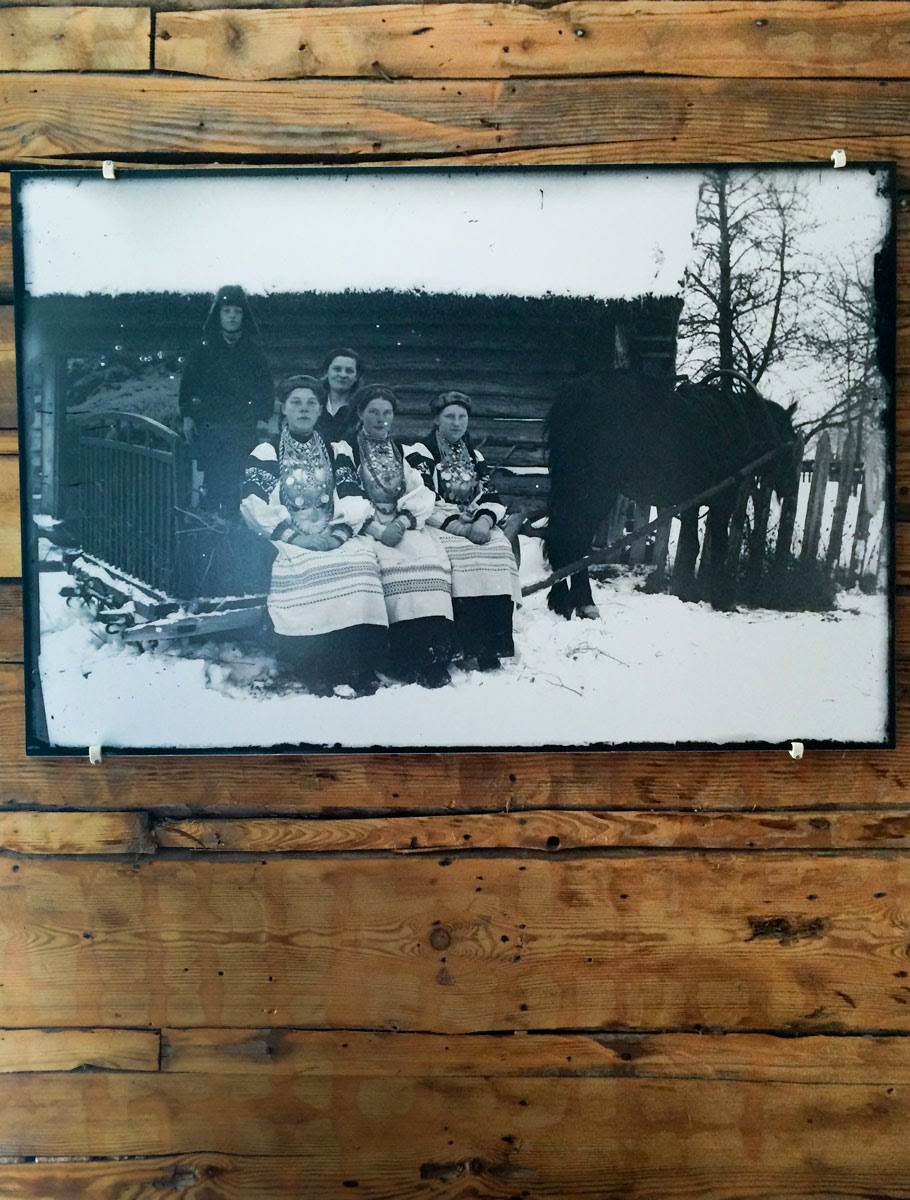 At the gallery we couldn't believe it when we saw our mitten knitting friend, Külli, who we had met previously at the Tallinn Medieval Days. She is originally from the Seto region of Estonia and was thrilled to have found out we would taking a field trip in Seto, so she showed up with her goodies. 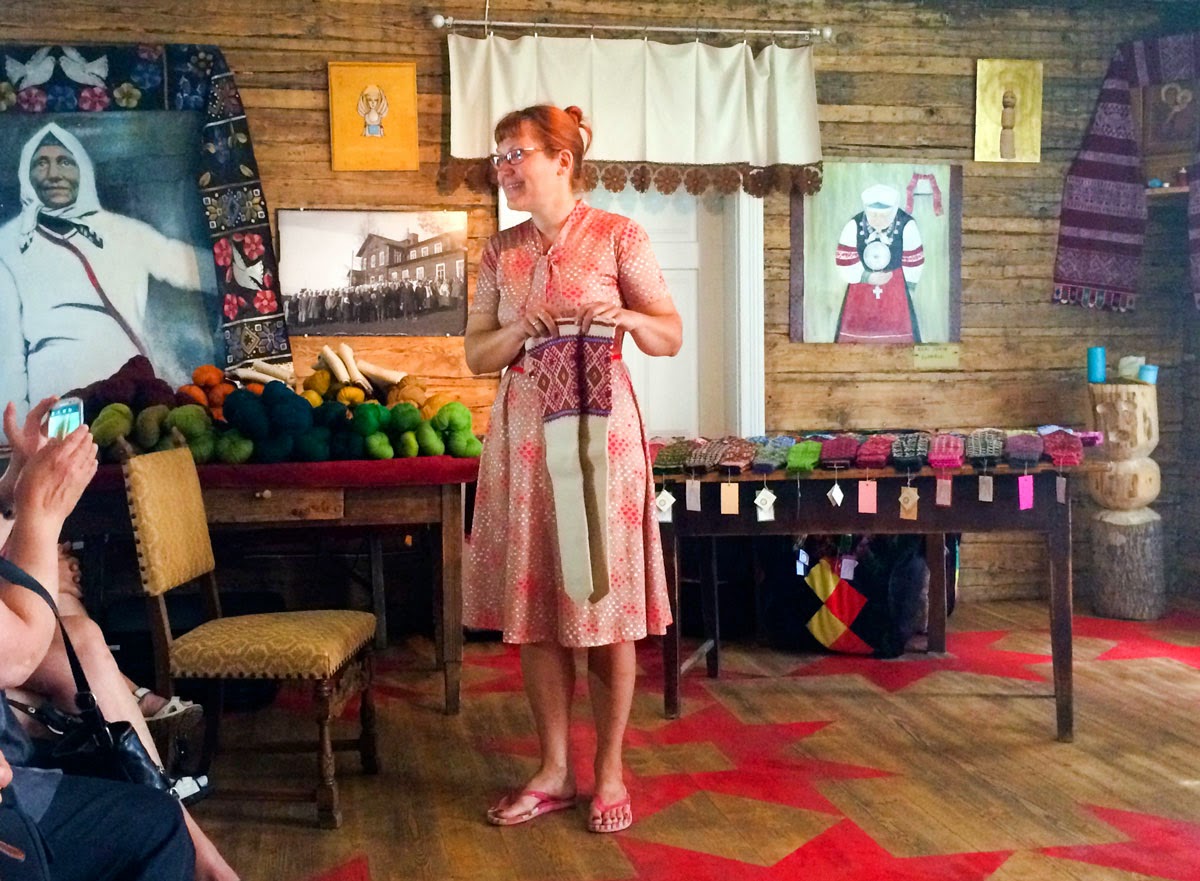 She not only brought her mittens, but also giant skeins of amazing Estonian yarn which is what she uses to knit the traditional mittens. I, of course, had to stock up on it! 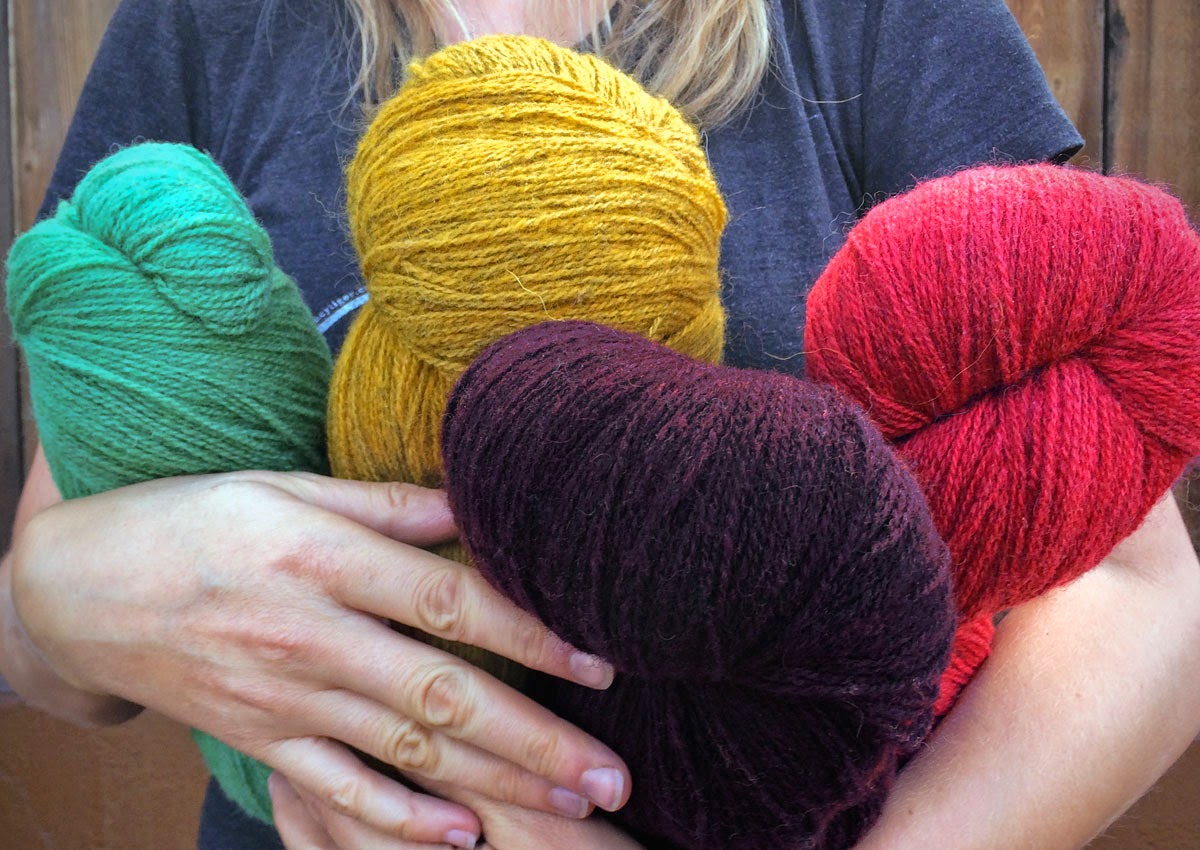 After we left the gallery we headed to a nearby house for a Seto style meal.

We had delicious chilled soup made with spring onion greens, cabbage and sour cream, black bread, smoked local ham, cheese, honey, and baked porridges made of oats, barley, and rice. According to the Estonians, the Seto region is known for this lineup of food. 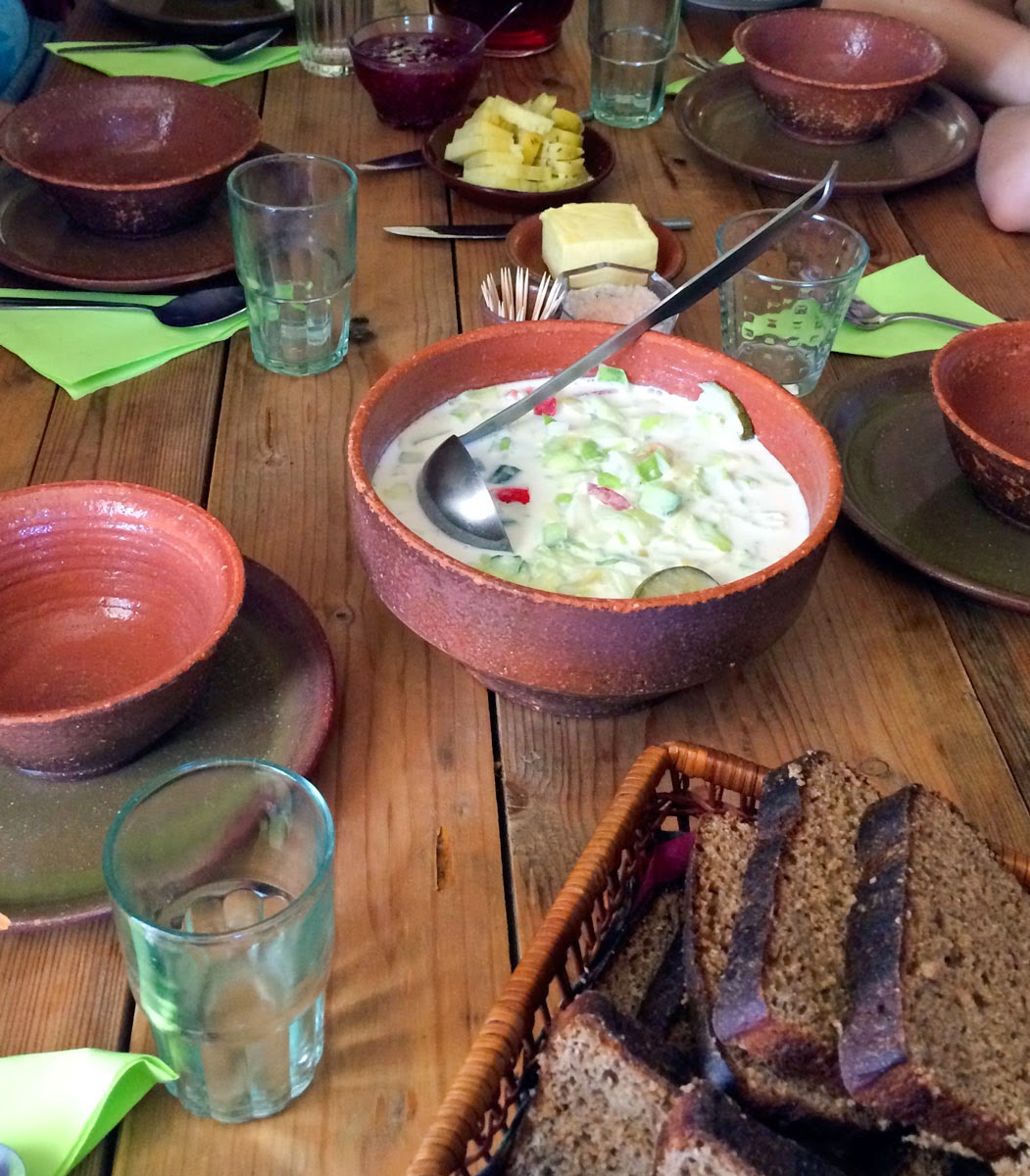 Ülle explained that Seto people like to keep their meals simple, so there is more time for perfecting their handicraft skills. 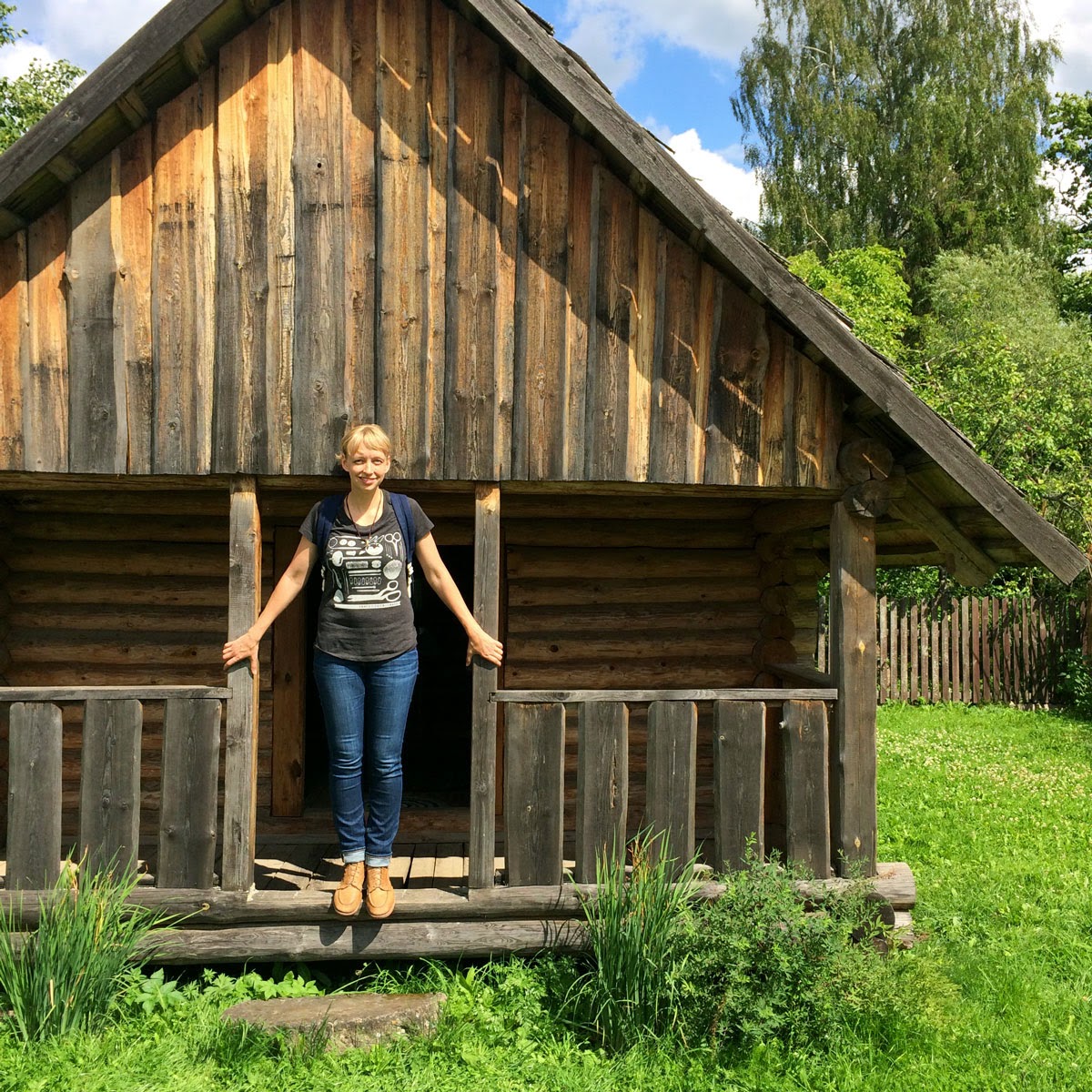 The next stop was the Obinitsa Seto Museum. Here we were able to learn more about the life and crafts of the region. 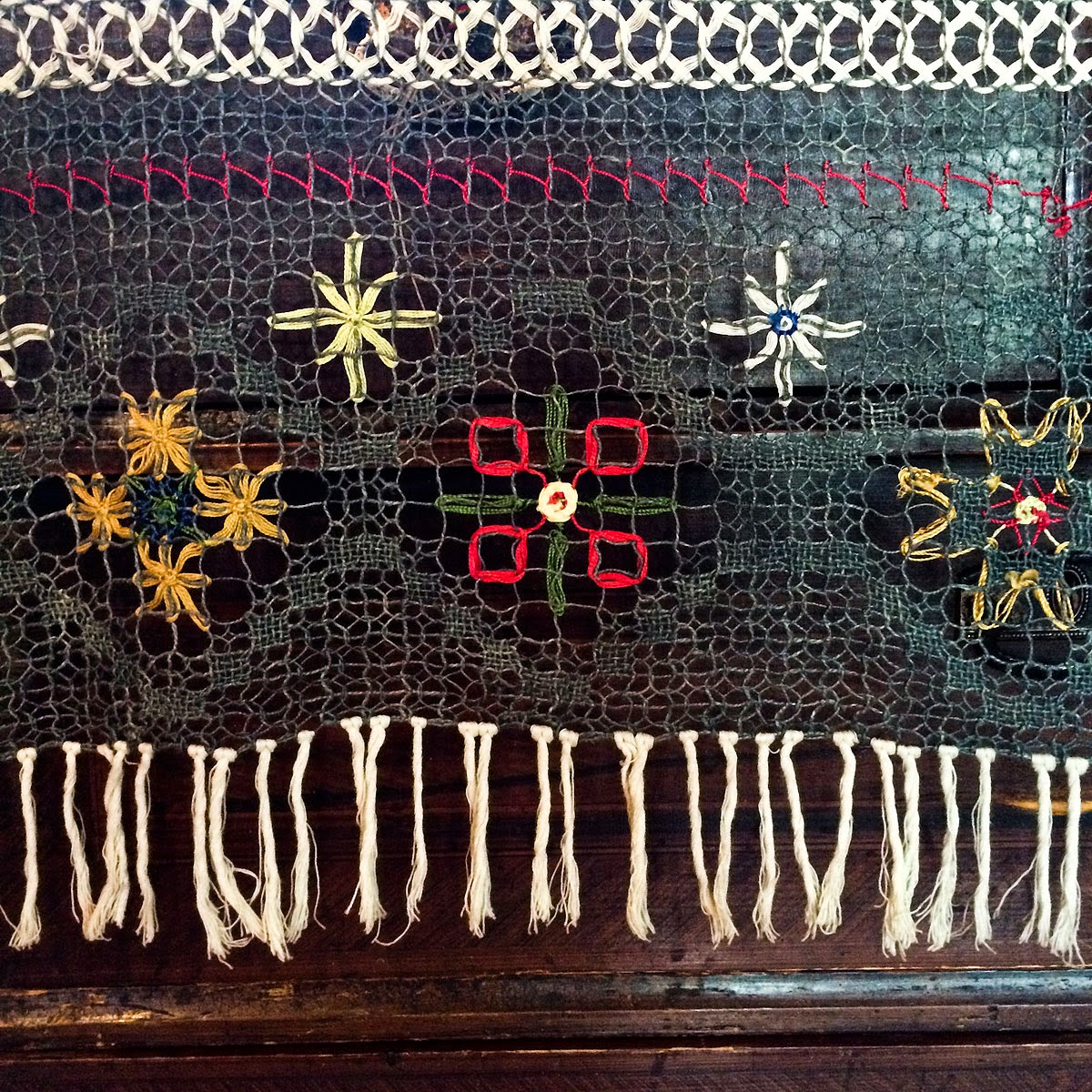 Inside the museum were so many more amazing examples of Seto handcrafting skills... 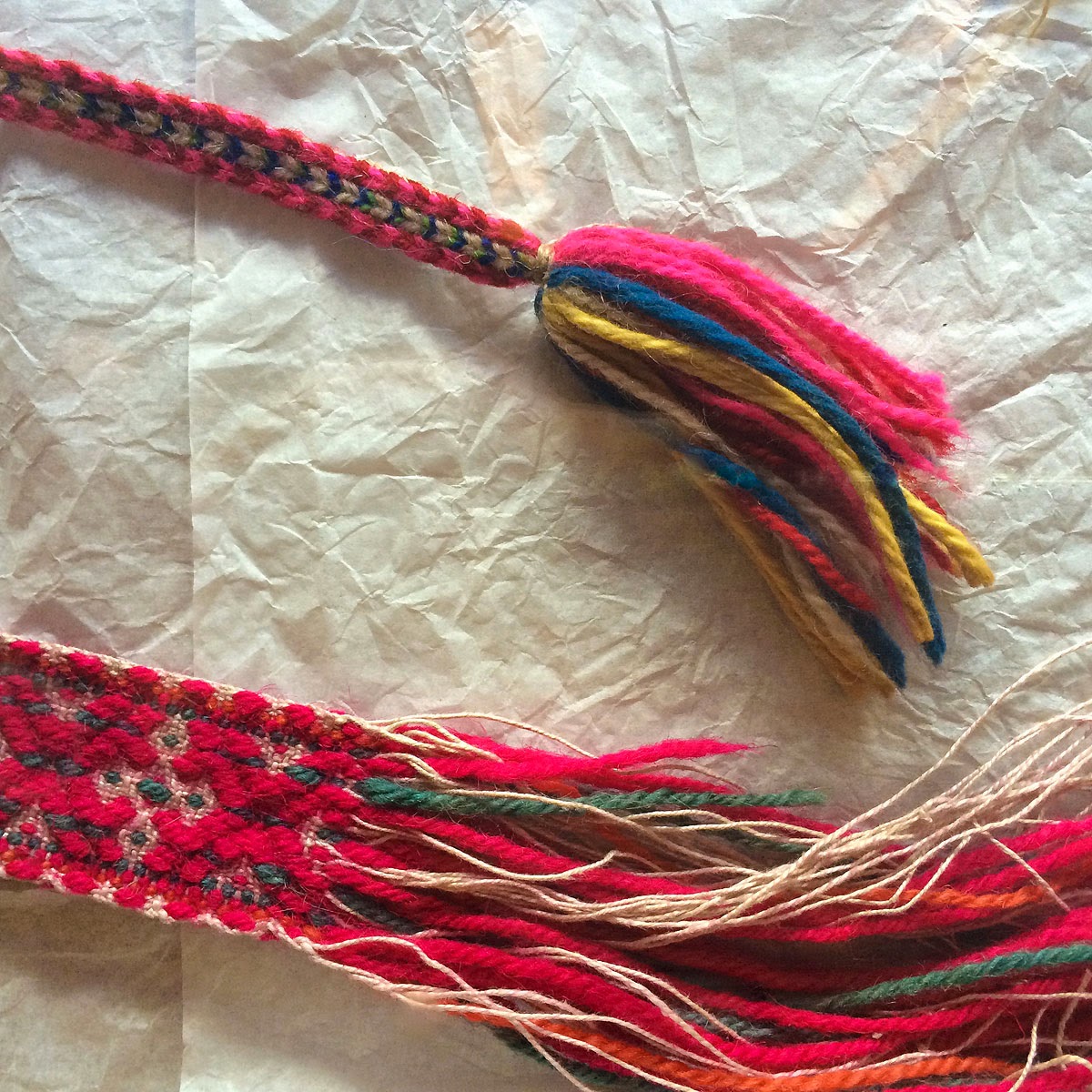 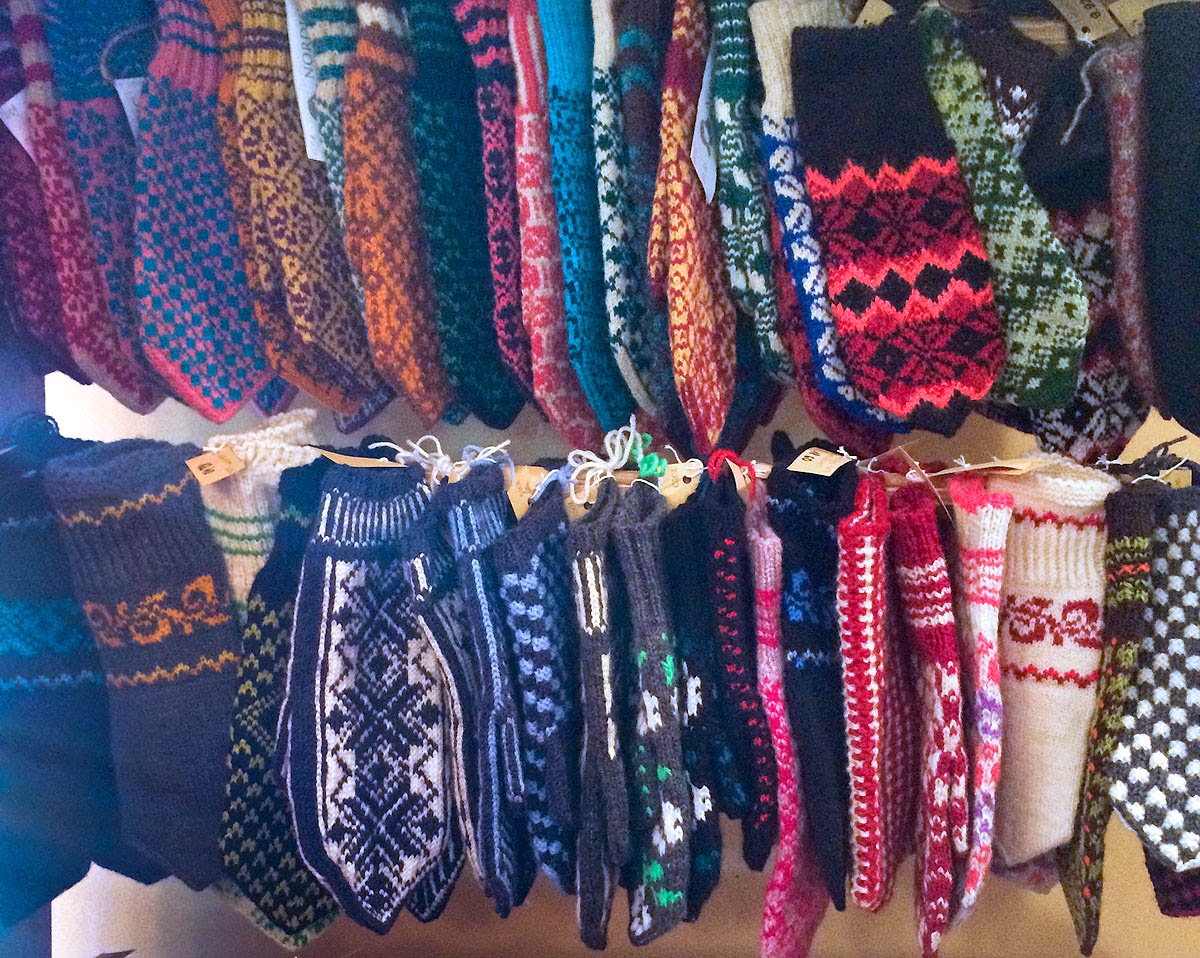 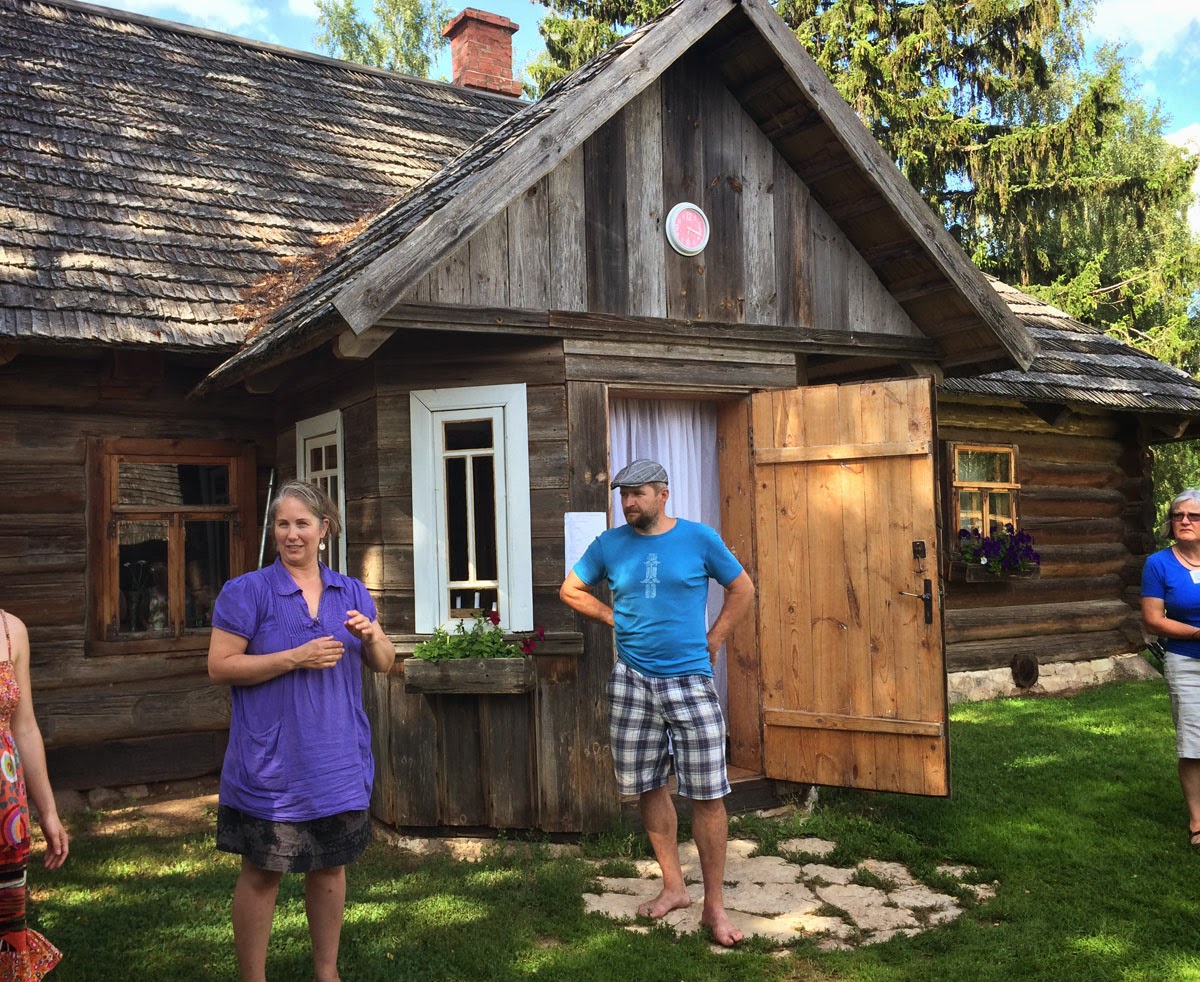 Our next stop was a recently renovated, historic Seto farm. The traditional farm was set up in a rectangle of buildings, with a home, grain storage, barn, and other buildings built around a courtyard, so that there was a private outdoor area for the family to gather, socialize and work.

The couple who renovated the farm bought the property and started work on it when it had begun to fall down, with leaking roof and drafty doors and windows. They painstakingly replaced wooden shingles and fixed it up keeping with traditional building methods. The farm is dotted with fruit trees and animals. The husband has also set up his own beer brewing area and shared some samples with us. The beer was a local style made with leftover black rye bread. It was dark, cloudy and delicious! 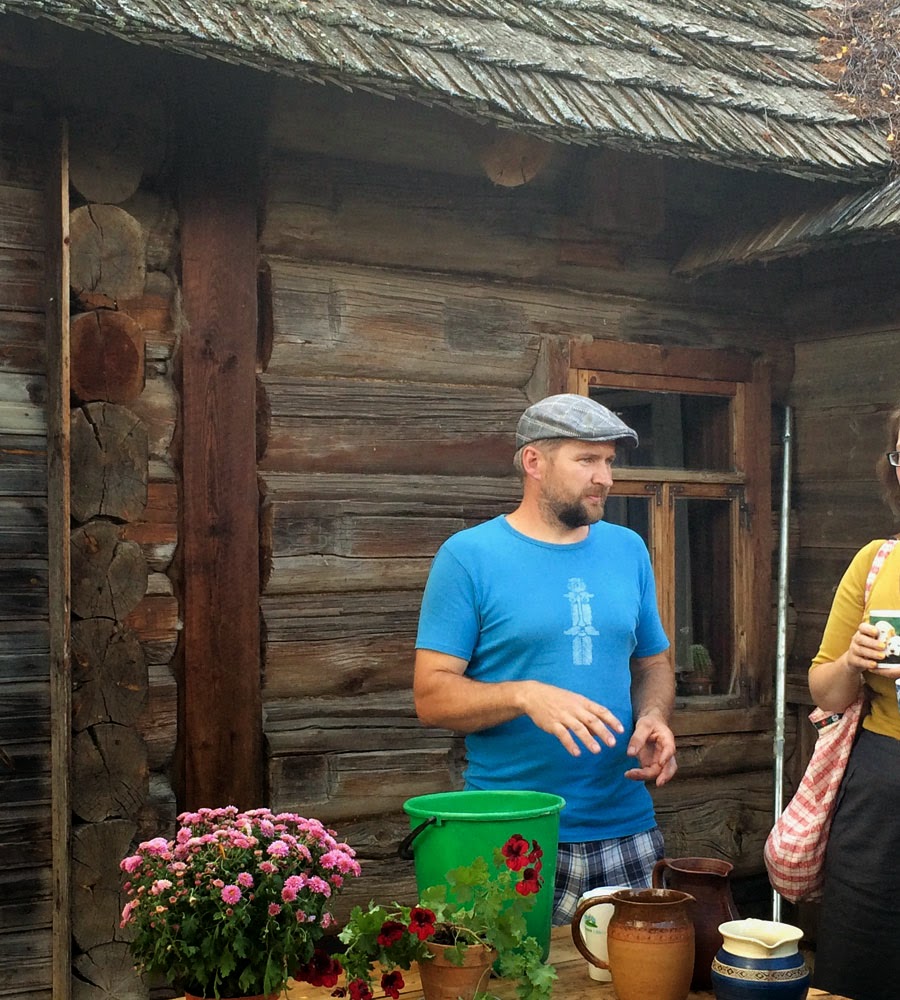 The day we visited, the farm was hosting an Estonian music camp for kids. There were children playing zithers and accordions and mandolins and dancing in the courtyard.

Intricate hand-plaited trims are a standard craft in the region, so it was no surprise when I saw the amazing braids all the girls had in their hair. Everything about the farm was so magical and I didn't want to leave! 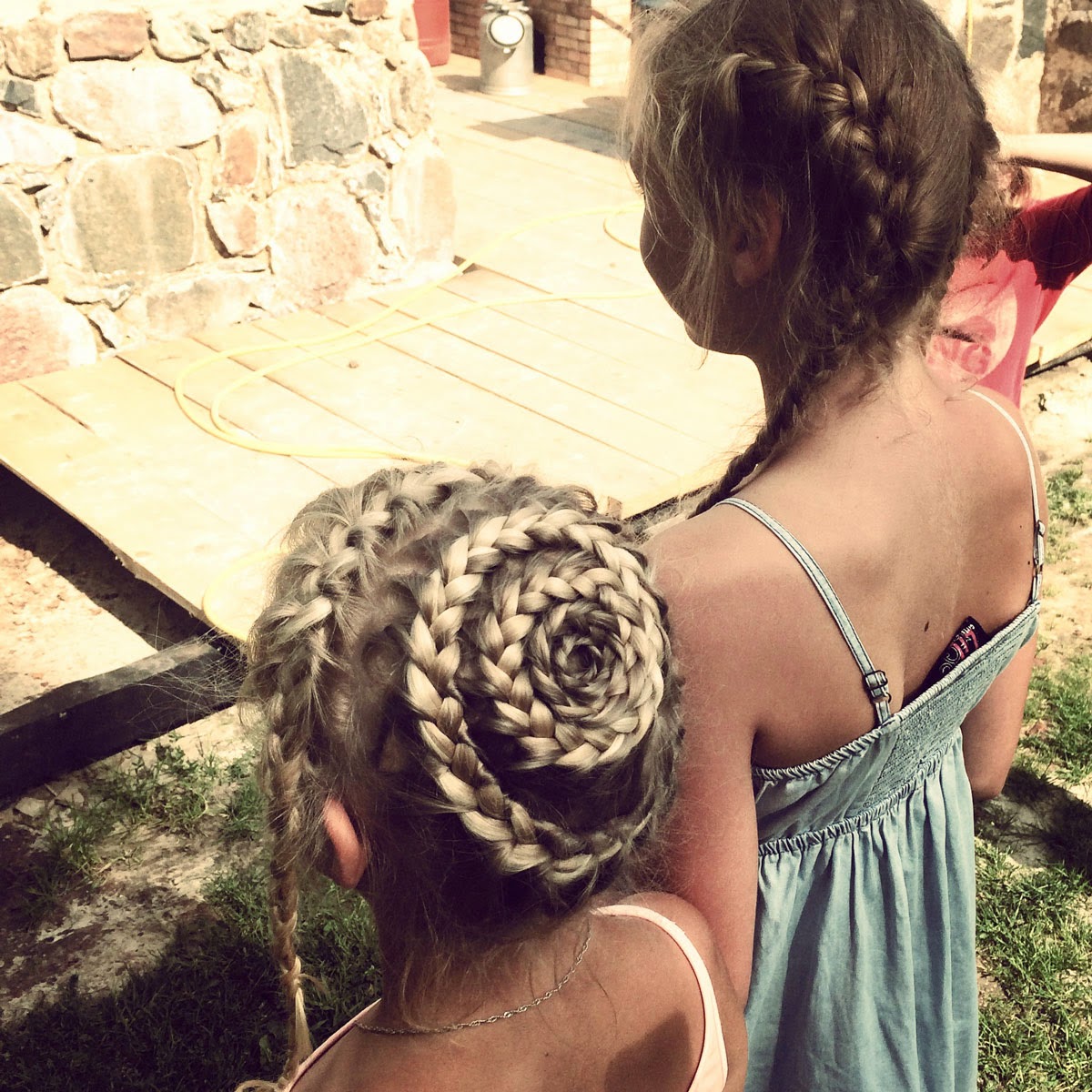 Before we left to return to Olustvere, Ülle and a friend treated us to some traditional Seto singing. Enjoy!

Tomorrow--check back for more of the crafts we learned at Craft Camp!